It started with a felt tip pen and a piece of paper. Sat in the back of a greasy spoon, I jotted down ideas for a new play named Jim Jams, a title I hated and loved in equal measure. Jim Jams was my mother’s pet name for pyjamas, while psychiatrists use the term to refer to periods of extreme anxiety. Love. Hate.

I’ve lived with anxiety disorder since the age of 19, and have sought help through various methods: I take medication, I’ve seen therapists, I practice Cognitive Behavioural Therapy (CBT, ICYDK). Some days I’m fine, and some days I’m not, but there’s a curious consistency that has never faded with time: anxiety, for me, usually rears its ugly head at night.

This play is specifically focused on the hours between sleep and waking, and much like anxiety itself, I didn’t know exactly how I wanted to tackle it. When the Scottish Mental Health Arts Festival offered me a chance to be a part of their new scratch night, 5 Ways to Begin, I knew this was a fantastic opportunity to experiment with Jim Jams.

Last Saturday (October 14), I arrived at Flourish House in Glasgow with a carrier bag of props (a blanket, a laptop and some old pyjamas) and teched out what I had so far. An incomplete fragment of work, with no idea where it was meant to go. Bringing it to the stage for the first time is always a strange experience: these words lived inside my head for so long, and now they’re out, filling up the spaces in this big, empty hall. 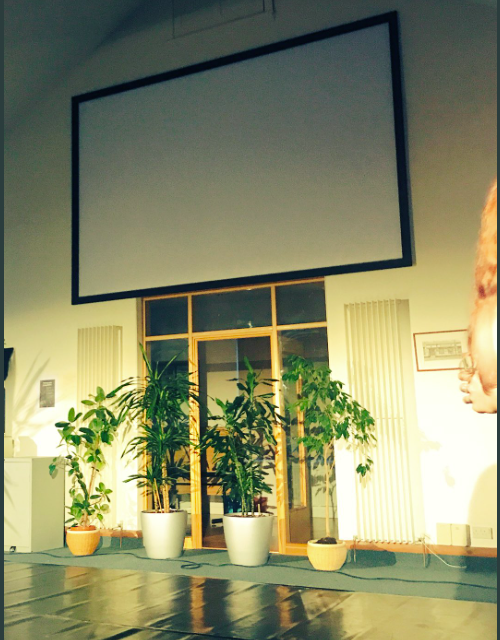 Curiously, I wasn’t nervous. I regularly read my work at spoken word events, and this just seemed like a logical next step. I have written two plays before, and though I was never the one performing the text, I reasoned that the experience could not have been all that different.

Of course, this performance was different. It was a scratch night, which meant I would be getting feedback from the audience in real time. Underneath each seat in the audience was a felt tip pen and a piece of paper, there so that my audience can tell me exactly what they thought of my reading, be it good or bad.

The ten-minute performance went by without incident. I delivered the text exactly as I hoped I would, and the accompanying video didn’t freeze or mysteriously set on fire, so that’s all positive. Then came the question and answer session. I asked the audience what they wanted to see happen next, and they answered as I hoped they would.

‘I want to see things from other people’s perspective’

This kind of feedback is essential. It’s one thing for me to know how I would like a piece to progress, but it’s another to hear it come from an audience. They are the ones who will view and take in the work, and their opinions are so useful when that work is being crafted. At the end of the evening, I was given a handful of notes, with scribbled comments. The feedback was so supportive, helpful and positive. I’m still not sure where I want the next phase of this play to go, but I do know one thing: the next scene all started with a felt tip pen and a piece of paper.